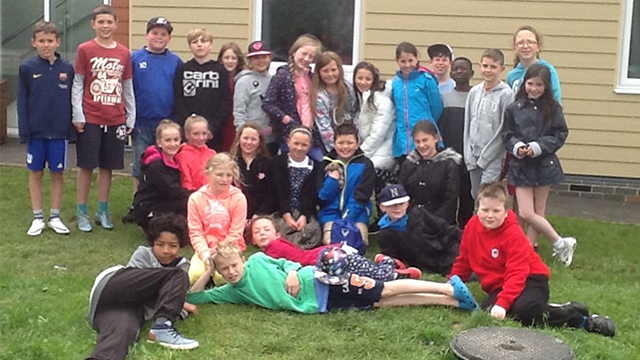 Class 6 from St Fagans CW Primary School visited PGL Liddington in May. The children had an amazing time. It was a week rich in experience, which they will never forget.

The pupils had many opportunities to learn and grow: from the thrills and spills of the high activities, to the problem solving and teamwork, to the social interaction. They returned as more experienced and developed children.

Our week at PGL also provided us with a whole week of learning activities based on our experience. The children were keen to reminisce and reflect on their week and channelling their motivation and enthusiasm resulted in some amazing work.

We had rounded off our week with a walk around the site, recalling emotions and telling anecdotes about each activity. To facilitate discussion, we had used the phrase, ‘This is where …’, and back at school this became the basis for a poem, which resulted in some wonderful, honest recollections, which captured the essence of their week at PGL.

The children did some excellent ‘based on real events’, fiction writing. First, we generated some sentences using ‘showing not telling’ to describe the emotions of a fictional character before, during and after a PGL activity. Then, we wrote a longer description of a character doing one of the activities, showing their thoughts and feelings along the way.

Throughout the week, I had taken many photos and video clips of the children. I had also filmed some clips of children commenting on their week. The children used these to create an advert for PGL Liddington. They used iMovie to choose and edit images, add persuasive language in the form of text and narration, as well as music to create an adventurous mood.

Reflecting on our week was also an opportunity to use our oracy skills in a PHSE context. In pairs, the children discussed how they had seen our school values demonstrated at PGL. When sharing with the whole class, the children were able to highlight many examples of Perseverance, Courage, Friendship, Trust, Compassion and Respect, which they had witnessed at Liddington.

Our week at PGL also provided a springboard for using and applying maths and geography skills. Providing the children with a grid-lined A3 sheet, marked only with the shape of the main building at Liddington and a scale of 6cm=100m, I challenged the children to draw a map of the site with a key. There followed much discussion of position and scale and the results were interesting. No two maps were identical but all included the areas visited by the children and were clear and drawn to scale.

Having done the National Tests the week before PGL, the class was very familiar with the types of questions asked in the Maths Reasoning test. Using an adventurous activity centre as a context, I asked them to create problem solving questions of their own. These included questions about the height of the climbing wall, time spent doing activities, distances walked during a morning and required various calculation methods. In writing, and then answering the questions, the children needed to apply and use a wide range of maths knowledge and skills.

The enthusiasm with which the children approached all these learning opportunities was a direct result of their time at PGL Liddington. The week provided them with memorable experiences, which provided a very real context for learning across the curriculum.

Examples of classroom work by Class 6.

If you're a teacher who has recently been to PGL with a school group, we'd love to hear about your pupils' experience: socialmediateam@pgl.co.uk

Find out more about primary school trips with PGL.